Part II of II: Ultrasound For Safety… If Not for Anything Else!

In Part I (Oct/Nov 2017 Uptime), the focus was about the use of ultrasound and SAFETY. Hopefully, it spurred a discussion in your facility as to how this technology, no matter its age or origin, can be a lifesaver. This technology can truthfully claim that it has been around longer than any of you have been alive. Yet, it is still a most valuable technology in many, many ways.
Part II focuses on ultrasound for reliability maintenance and presents real-life situations as to why electrical workers and infrared thermographers should use ultrasound as a complementary technology.

The ultrasound applications presented in both parts of this article are tried-and-true. Despite this, many electrical workers/technicians and infrared thermographers still need convincing to learn to use ultrasound as part of their electrical inspection. So, here it is in a nutshell: Making ultrasound a complementary technology to your electrical inspection might just be the difference in you going home safely today. Yes, those are strong words, but they need to be written. They are based on years of experience from what is known today compared to what was known before NFPA 70E, the Standard for Electrical Safety in the Workplace from the National Fire Protection Association (NFPA), was being practiced. In short, the use of ultrasound for electrical inspection is strongly advised.

Ultrasound for electrical inspection of switchgear and substations to detect and locate arcing, tracking and corona discharge is still one of the least understood. In some cases, it has been easy to ignore.

Every industrial plant and power generation and utility provider have electrical applications where ultrasound should and can be used religiously. If you still need convincing, arrange for an ultrasound demonstration to scan electrical switchgear and substations with plant workers to demonstrate the use of ultrasound and how it can detect and locate electrical anomalies that disturb the atmosphere around it with either an arc, partial discharge, etc.

Corona, with its by-products of nitric oxide, carbon, ultraviolet light and ozone, all together provide a continuous decay of the apparatus, hardware, or connections. Well within the range of the ultrasonic translator/receiver, it can be easily detected. Once found, the trick is to convince oneself to doing something about the findings. If you have a connector or piece of hardware that is continually being decayed, looking to find ground, would you allow this to continue? How severe is it? If corona is present, it is severe. 1 The number of decibels one detects is not the severity, but more to do with how close you are to the anomaly.

Figure 1 is the result of only detecting two to three decibels when scanning the doors of a closed 7,200V phase to ground, 12,470V phase to phase cabinet. The sounds of corona discharge prompted an immediate inspection of the electrical cabinet. Once opened, a plastic shield was directly behind the doors between the exterior of the cabinet doors and the stress cones. When energized, corona can be heard some 40 feet away and another six to seven decibels higher was also noted. 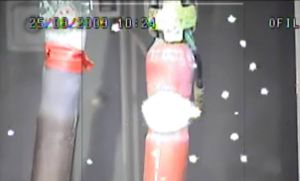 Figure 1: Corona seen through a corona camera, with the dots representing ionized gas surrounding the anomaly; Ultrasound detected corona through the closed doors of the cabinet Note: The number of decibels one detects is not the severity, but more to do with how close you are to the anomaly.

A week later, a corona camera was used to video the damaged stress cones and associated hardware. The damage was not confined to one area, but multiple locations within the cabinet. This could have become a catastrophic failure. The cabinet was located on a small college campus walkway with lots of daily foot traffic within only a few feet of the cabinet. 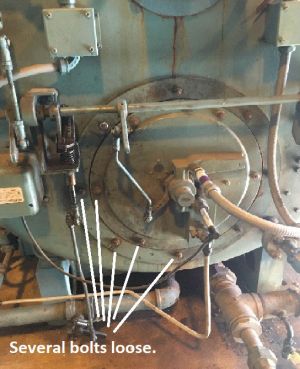 On one particular day in a high-rise building in Los Angeles, California, the facility maintenance team had to use two hands to open the boiler room door due to a strong pull of negative air from inside the room. In other words, the room was evacuating a large amount of air in the room to a “safe” working range and to lower the effects of carbon monoxide in the room. Ultrasound was being used in the room for leak detection of the compressed air supply lines. Fortunately, the first thing detected was not compressed air supply leakage, but leakage from several bolts of the boiler’s horizontal flame box (Figure 2).

Using the ultrasound instrument and a rubber cone in front of the receiver allowed for identifying each of the leaking bolts. It was also apparent that some of the loose bolts had broken torque-stripe. Once the bolts were replaced, it was evident the leakage situation was resolved because it only took one hand to open the door into the boiler room.

Back in 2009, an article written by Nancy Spring 2 stated, “According to John Speranza, vice president, hydrogen product sales, Proton Energy Systems, almost 70 percent of all electric power generators over 60 MW worldwide use hydrogen cooling.” The article went on to explain that there are two ways to fill the generator’s hydrogen demand: have it delivered in cylinders or make it on-site.“Hydrogen gas inventory becomes the chief safety concern because of the potential energy in hydrogen,” said Speranza.

For example, Speranza said a standard portable cylinderfilled with hydrogen at 2,400 psig is equivalent to 35 pounds of TNTin terms of explosion potential. A 12-pack of cylinders represents 420 pounds of TNT and a typical tube trailer, 5,585 pounds of TNT.

Hydrogen is an effective way to cool the generator and allows power plant operators to get a lot more megawatts out of a smaller generator (Figure 3). 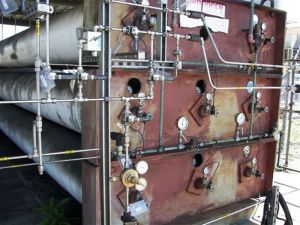 Do you have hydrogen at your plant? If yes, hopefully you have gas specific detectors and leak detectors. However, over the years, several technicians have found that ultrasound detects a hydrogen leak at a distance. Ultrasound also can locate a hydrogen leak around a generator’s seal.

At a power generation plant in Southern California, a group of Level 1 ultrasound technicians had left due to attrition and the ownership of the plant was changing. The plant had been unsuccessful in locating an ultrasound instrument on-site and after local services also failed to locate a nitrogen blanket leak, an ultrasound instructor was called in to locate the leak on a step-up transformer (Figure 4). It was found within 45 seconds. Additional inspections were conducted, including the switchgear and surveying for hydrogen leaks around the access plates of the generator/turbine. About 12 hydrogen leaks were found. Why so many, you might ask? Simply because of environmental conditions thwarted the use of a specific gas detector to sniff and detect the hydrogen leaks. 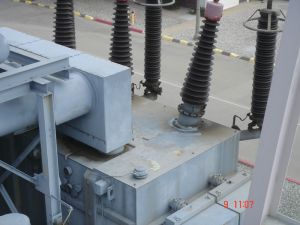 These environmental conditions were caused by the Santa Ana winds of Southern California. Their ferocious, both for allergies and for detecting gas leaks, such as helium or hydrogen in open spaces. However, an ultrasound detector detects turbulence, no matter what the air or gas. With the use of a liquid wetting solution that amplifies leaks, a thin film of this surfactant can be sprayed onto the bolt and bolt heads and detect bubbles popping from bubbles so small they were very hard to see with the naked eye. The sound, very much like rice cereal popping in milk, was detected in areas surrounding the bolt heads and flanges (Figure 5). The hydrogen leaks detected by ultrasound could have been detected by a specific gas detector had the winds not been blowing. 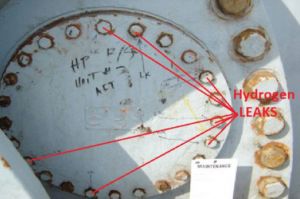 Hopefully, the real-life examples in this article give you pause in understanding how much passion ultrasound users, the practitioners of ultrasound for reliability maintenance, have when using these instruments to keep people, facilities, and the environment safe.

Take some time to look at your ultrasound inspection program and do the following:

There are so many applications where ultrasound can be used if technicians are trained in its proper use. As the slogan goes: Safety First. Safety is everyone’s responsibility and the use of ultrasound can ensure that safety.

Ultrasound for SAFETY…
If not for anything else! 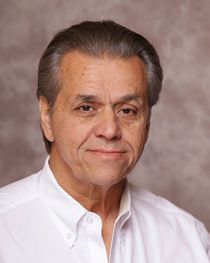