If you’ve attended ultrasound training courses, then you most likely learned about how to use a four point inspection for valves, no matter the valve type. However, the discussions within this practice or application always lead to other valve inspections. Among them is the use of ultrasound to listen to a valve through non-contact, or simply aiming the instrument at the valve to determine its condition. This would be like having an inverted bucket steam trap that has a “blow-by” condition (steam blow through). By simply aiming the ultrasound at the inverted bucket trap, the user would be able to hear the steam rushing through the valve and creating enough high frequency to determine its condition. However, a more favorable practice is making contact with the trap.

Ultrasound detects friction within the air, such as the sound a compressed air leak would make. Turbulent flow within a pipe or through a valve may also create sound audible to the ultrasound instrument, whereas a laminar flow may not produce enough friction to be audible to the instrument.

Ultrasound is high frequency and defined as sound above 20,000 hertz or 20 kHz. Today’s ultrasound instruments have little trouble defining ultrasound in a noisy environment.

Another ultrasound practice, referred to as airborne ultrasound, is non-destructive testing (NDT). NDT instruments commonly use a split transducer that sends a signal through the medium being tested. As it reflects back, that signal is calculated internally to detect thickness or location of a crack or anomaly within the metal or materials. This method is known as pitch-catch technology. Very short ultrasonic pulse waves have center frequencies ranging from 0.1 to 15 MHz and occasionally up to 50 MHz.

There are two ultrasound methods for predictive maintenance (PdM) or condition monitoring: airborne and structure borne. Airborne ultrasound uses the transducer as an open, high frequency receiver to detect a leak or electrical leakage (e.g., arcing, tracking and corona) within the surrounding air or atmosphere.

Structure borne refers to a transducer that is mounted to a magnetic base or a probe that receives the high frequency and amplifies then heterodynes the signal to a low frequency audible sound that can be discerned by the user.

This practice of using ultrasound for reliability and PdM is a practice that should never be underestimated. It should go without saying that you cannot have a world-class maintenance program without ultrasound.

This bypass system permits stable operation of the boiler when the turbine trips off-line or during start-up operations. Steam flowing through the high pressure bypass control valve is throttled and cooled to a temperature slightly above the HP turbine exhaust temperature by spraying feedwater at the outlet of the bypass control valve. The control system must provide the logic to open the valve quickly and modulate the feedback control to pressure and temperature set points.

During operation, the HP bypass provides the same expansion and cooling that would have happened in the HP turbine.

Jim Cerda, a process engineer at AES Southland with Ultrasound Level 1 training, had been requested to “help” find a superheat bypass valve leak or “leak-thru” that may be leaking within the facility’s Unit 3 superheat steam bypass system.

Here is Jim's account of the inspection as it took place:

The leak-thru was affecting the unit heat rate as superheat steam was leaking through and bypassing the turbine and going back into the condenser. The turbine bypass system is a basic component of the power plant that has evolved over the years to increase operational flexibility and plant life, protecting its components during start-up mode. Each unit at this plant has a total of seven superheat bypass valves, commonly nicknamed the “seven sisters.” They bypass the turbine during start-up. The boiler’s primary superheater is rerouted back to the condenser during start-up until steam conditions are met to roll the turbine. Also during start-up, the bypass valves maintain boiler pressure until control is sent back to the boiler feed pump.

This particular Unit 3 was entering its planned outage season, so there was a very limited window to locate the source of the leak and take care of the problem. The “help request” was issued by a maintenance technician that had planned to use infrared thermography (IR) technology to look for the leaking valve. But, it was decided to bring in an ultrasound instrument with a contact probe to listen to the valves.

The turbine bypass system enables independent activity of the steam generator and the turbine during start-up, load rejection, shutdown and variable pressure operation.

Upon reaching the location of the superheat bypass valves, it was noticed that the valves were almost completely covered with insulation and aluminum lagging, as well as insulated blankets. The valve bonnets and the upper sections of the control valve diaphragms were the only parts of the valves that were exposed.

After finishing the testing of each valve, the maintenance technician using infrared thermography had no conclusion. Looking through the IR camera, the three valves looked the same.

The sound, he said, was so loud that “it sounded like a continuous explosion” and it was very clear that it was the leaking valve of the system. He then admitted that the ultrasound instrument was “way cool.”

Usually, heat rate loss is an accumulation of many small leaks that must be all repaired to have a full impact on heat rate dollars. With fixed contracts, companies have to look for these types of savings to retain projected profits. Heat rate dollars are dependent on fuel and prices, and the price of megawatts at that time.

The power plant has since sent four of its operators and maintenance technicians, as well as a couple of other technicians, to acquire ultrasound Level 1 certification. Through their successes, they have found many leaks throughout the plant, which included compressed air, fuel gas, hydrogen gas (H2), nitrogen gas (N2), water and steam. Ultrasound is also being used during the electrical IR/thermography scans, for nitrogen blanket leaks on transformers and is part of the facility’s reliability maintenance program.

Ultrasound is just part of an effective reliability program. It complements vibration and infrared programs. Remember: You cannot have a world-class maintenance program without ultrasound. 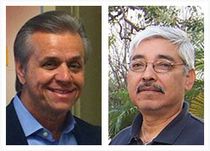 Jim Hall, Executive Director of The Ultrasound Institute (TUI) and Ultrasound Technologies Training Systems (USTTS), has over 25 years of experience and operates as a vendor-neutral company, providing on-site ultrasonic training and consultation. Mr. Hall is the author of the free biweekly newsletter, Ultrasonic War Stories, and is a regular contributing author for Uptime Magazine. www.Ultra-SoundTech.com

Jim Cerda is a Process Engineer with AES Southland Engineering Group in Long Beach, California. Mr. Cerda has over 30 years in the power utility industry, with 15 years of experience in operations and maintenance.